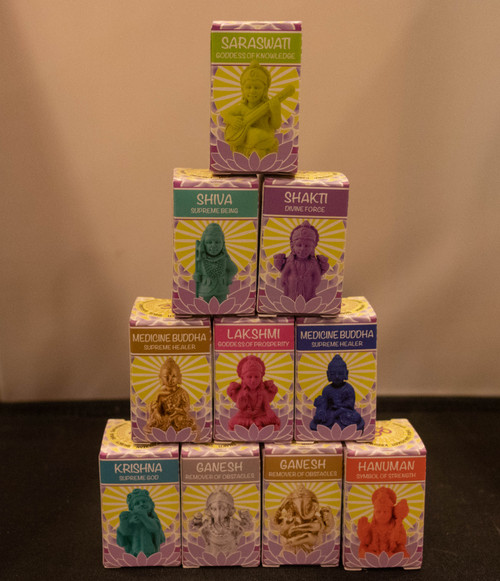 Krishna: Blue skinned Krishna is the deity of love and compassion. Krishna's promise to humanity is that he will manifest himself and descend to earth whenever dharma declines.

Ganesh: One of the supreme deities and is worshipped by all sects of Hinduism. He is the lord of success, knowledge and wealth; also known as the remover of obstacles.

Hanuman: Hanuman is worshipped as a symbol of physical strength, perseverance, and scholarly devotion. Hanuman is usually depicted as the epitome of devoted service and loyalty.

Saraswati: Worshipped as the goddess of learning, wisdom, speech and music. She is associated with the trinity of Saraswati, Lakshmi, and Parvati all of who help Brahma, Vishnu and Shiva in creation, maintenance and destruction of the Universe.

Shiva: Tasked with destroying the Universe in order to prepare for its renewal at the end of each cycle of time. Shiva's destructive power is regenerative and is the necessary step that makes renewal possible.

Shakti: The mother goddess and the universal principle of energy, power, or creativity; many people offer prayer to Shakti before beginning any intellectual persuit.

Lakshmi: Lakshmi is the goddess of wealth and prosperity of both material and spiritual. The deity of beauty, purity, and domesticity, the image of Lakshmi is often found in the homes of the faithful.

Medicine Buddha: Known in Tibetan Buddhism for his healing power. During meditation repeat the Medicine Buddha mantra to promote healing and release past negative karma.